Brave Talk is out of beta after a 14-month testing period where more than 14,000 daily users interacted with the tool. The feature is built directly into the Brave browser, allowing users to initiate a call by clicking an icon within the window or going to talk.brave.com.

Previously known as Brave Together while in beta, Brave Talk users can enable multiple layers of encryption on calls, meaning eavesdroppers can’t listen in. It also doesn’t save metadata, so calls, images, and activities can’t be shared without user consent. 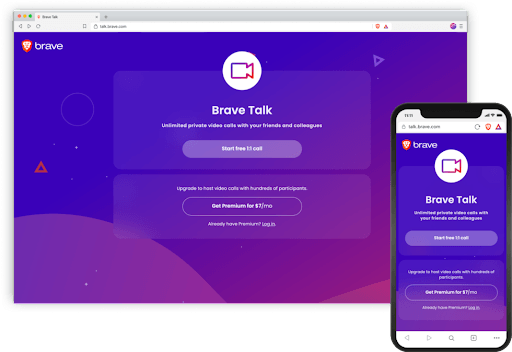 Brendan Eich, co-founder and CEO of Brave, details the need for a privacy-first video conferencing option in a press release. “Big tech has a firm grip on the market as it exists today, and Brave is determined to offer users an alternative that challenges the giants and puts the power back in the hands of the user. With over 36 million monthly active users on our browser, we are reshaping the industry with our privacy-by-default ecosystem.”

Brave Talk is available in both free and premium versions. Free users get unlimited call times but can only have one-to-one calls. Also included is video groupwatch and YouTube live streaming. The premium version offers group calls, call recording, and hosting tools like participant muting and entry passcodes. It’s worth noting Android and iOS users only have the premium app available right now, but the free version will be rolling out in the next few weeks.

Read also: The Best Zoom Alternatives for Your Business

How private is Brave Talk?

Brave Talk’s cornerstone is privacy, and for many internet users, it’s quickly becoming their cornerstone, too. About 74 percent of internet users in the US are more concerned with their online privacy than ever before. Brave Talk maintains that its non-tracking credentials separates itself from competitors, directly calling out competitor Zoom and its monitoring and potential selling of consumer data without consent.

But is it really that much more private?

Yes. There are no extra apps or extensions needed to use the tool. Since extensions are given special authorization and permissions within the browser, they’re attractive targets for attackers. Most extensions can be updated automatically, meaning that even a legit extension could be hijacked and updated on your device without you ever finding out.

Another plus with Brave Talk is that the default setting blocks trackers. Brave states that users can enable increasing layers of encryption in the settings, with the current strongest level available in both free and premium versions as “Video Bridge Encryption.”

If this is the first time you’ve heard that term, you’re not alone. Eich says video bridge encryption “ensures that video and audio streams are encrypted using keys generated by the participants, which prevents eavesdropping on the Video Bridge Server.” He says Brave Talk’s anonymous credential system guarantees that the company doesn’t know who users are and who they’re talking to.

Of course, end-to-end encryption is the gold standard when talking about customer data, and Brave Talk doesn’t offer that yet. The company is working with 8×8 to eventually roll that out, but there’s been no official timeline given.

Compare this with Zoom, who introduced actual end-to-end encryption in November 2020 after getting into hot water about falsely claiming to offer it before that time. While Brave Talk doesn’t offer that level of encryption yet, there hasn’t been violation of user trust like there has been with Zoom — especially after the Federal Trade Commission announced that Zoom “misled users” and “engaged in a series of deceptive and unfair practices” regarding its own security.

So for those who really value their privacy, Brave Talk seems like a good choice. Its base package is free to use, there haven’t been issues with consumer trust, and for those already using the Brave browser, it’s easy to set up.

If you’re looking for more options to consider for video conferencing software, check out our Video Conferencing Product Selection Tool. We’ll send you a list of recommendations that are tailored to your needs.