(Note: You can download our full report from our research library here!)

Employee engagement is one of the largest challenges facing the business world. The premier survey on employee engagement reports that only 29 percent of Americans are emotionally engaged with their work.1 Organizational, psychological, and environmental factors were all cited as reasons for such a dismal number.

It’s estimated that US businesses lose between $450 and $550 billion per year due to disengagement, which manifests itself in turnover rates, poor productivity, and below average work.1 To combat this, businesses are searching for scalable methods to better engage employees. In fact, many companies now view engagement as a competitive advantage.

Alongside such growing disengagement, the concept of gamification has experienced a meteoric rise in business culture consciousness. The application of game elements has both employee-facing and consumer-facing benefits, but it’s in the realm of employee engagement that the software has experienced its biggest growth.

But how do employees themselves feel about programs designed to improve their motivation and performance? The employee perspective is often left out or ignored, which could explain some the low average success rate of gamification initiatives.

In this report, we seek to answer the question: do employees actually want employee engagement programs added to their work environment? And if so, what type of program?

To answer these questions, we surveyed a random sample of 398 office workers whose main job functions were in marketing, customer service, or sales. We chose office-based workers because employee engagement software is most commonly deployed in office environments.

– 54 percent of respondents indicated that they would be more likely or much more likely to perform a task if it had game elements.

– 55 percent of employees said they would prefer to work in a predominately collaborative environment. Sales teams however preferred more competitive workplaces.

– Employees expressed the greatest preference for wellness and fitness programs at work (29.6 percent), followed by a point based rewards system (24.7 percent).

The primary purpose of this survey was to see whether the fundamental offering of gamification (engagement) had any grounding in an office setting. Although use of the term gamification may be commonplace in business technology circles, consumers are still learning what this unwieldy term means. To gauge their preference for such strategies, we asked employees if they would be more likely to perform a task if it included game elements.

Nearly 40 percent of employees indicated that they would be more likely to perform a task if it had game elements. This supports the overall trend of enterprise gamification and motivation software. When viewed from a simply yes or no perspective, the numbers of likely to not likely appear close – 54 to 46 percent. However, the divide along age lines is stark. 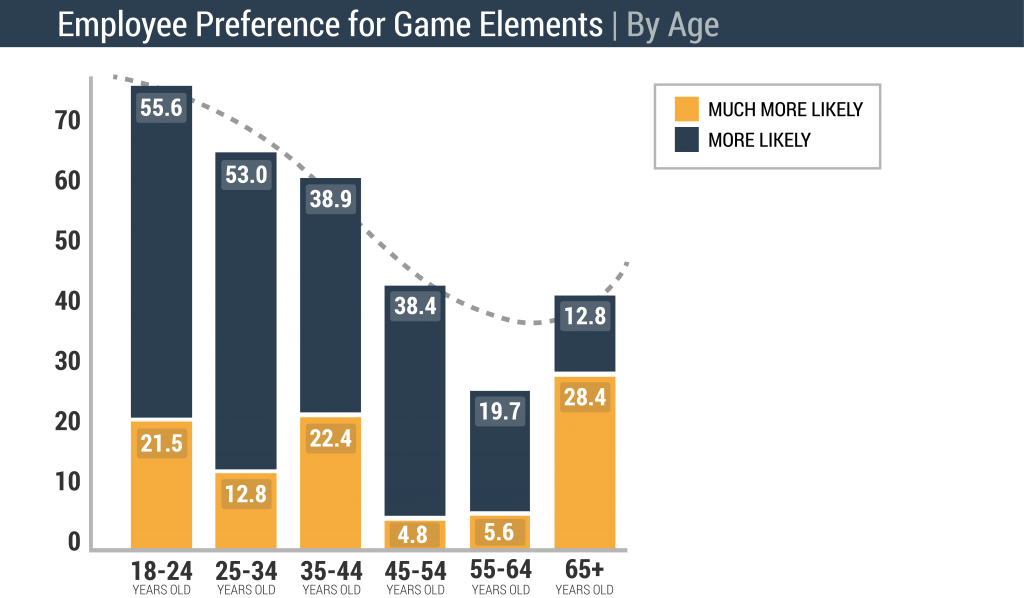 The results suggest that younger employees are much more open to the idea of working in an environment with digital engagement elements. There are a variety of explanations that could account for this, from the increasing popularity of video games over the last few decades3, to general familiarity with digital interfaces.

However, this difference in perspective isn’t only about age. Many of the respondents in the older demographic may serve in management positions. Employees in such roles don’t typically struggle with engagement because of the autonomy afforded them. Likewise, management positions are by nature more difficult to break apart into distinct pieces that can be “gamified.”

These respondents would have showcased skill in their chosen career path, which requires focus and sustained motivation. It’s unlikely that the majority of them need game elements to keep them engaged, especially as autonomy and progress are natural motivators. In contrast, younger workers may not enjoy the benefits afforded a more senior position, and therefore need help maintaining their focus as they begin their careers.

Employee Engagement Solutions Must be Tailored to Job Functions

To find out how each department felt about collaboration versus competition, we asked office-based employees what type of work environment they preferred. The overall results, across departments, are displayed below.

Given that a large portion of employee engagement programs are predicted to fail, businesses must consider the personality of their target audience – in this context their employees – before implementing gamification software. Unveiling a leaderboard that encourages competition between customer service reps, for instance, likely won’t work because that audience isn’t receptive to that type of motivation.

In order to find out exactly how employees thought gamification might help them, we asked them to choose what area engagement software would most help them improve.

Across all the departments surveyed, employees felt that engagement software would be most likely to help them stay motivated. This finding is significant, albeit expected. Gamification’s selling point is motivation – so much so that industry experts have suggested renaming the technology motivational software. The fact that office-based employees think such software would keep them motivated underscores the accuracy of such an idea.

It should be noted however that not all employees may be familiar with engagement software, and their answers could reflect general areas in which they perceive they need help.

Progress visualization was another significant answer that may indicate a deficit in the current office environment. Visualizing progress towards meaningful goals can serve as a powerful motivator, and help make the variety of tasks employees perform on a day-to-day basis less abstract.

While the single most poplar answer was “it wouldn’t help me,” employees were much more likely to choose a positive answer overall. Put another way, 69.1 percent of employees felt an engagement program would help them at work, while just 30.1 percent felt it would not.

A deeper look at the answers broken down by age group offers additional insight. In order to track general enthusiasm for engagement programs, we’ve grouped the positive choices into a single answer under “sees a benefit”). 18-44 year olds were more likely to select a positive response, while 42 percent of 45-54 year olds, and 51 percent of 55-64 year olds said they do not see a benefit. We attribute the uptick in positive responses in the 65+ age-range to a small sample size for that group (just 30 respondents).

Again, this gap could reflect general familiarity with the type of software being discussed, or may be tied to the nature of the jobs that different age groups generally occupy. If this enthusiasm gap is primarily due to technological familiarity (or lack thereof), it suggests that engagement programs may become increasingly popular as younger workers rise to higher ranks and occupy a greater portion of the workforce.

Wellness Programs are the Most Popular Use Case

To make the previous findings more specific, we asked employees what type of engagement program they would most like to participate in at work.

Overall, the most common answer was wellness programs, across the departments surveyed. Wellness programs are becoming increasingly common as the adverse health effects of weight gain and poor diet continue to gain national attention.5 Consequently, businesses are offering wellness programs to keep their employees healthier and in the office rather than out sick. For employers, the fact that employees across sales, marketing, and customer service all chose wellness programs as the type of engagement program they would most like to participate in could signal a way to solve multiple problems with a single solution.

Wellness programs may seem unrelated to actual day-to-day work, but many experts disagree. Charles Duhigg, author of The Power of Habit, contends that exercise is a keystone habit that affects other aspects of employees’ lives, especially work:

“Typically, people who exercise start eating better and becoming more productive at work. They smoke less and show more patience with colleagues and family. They use their credit cards less frequently and say they feel less stressed. Exercise is a keystone habit that triggers widespread change.”6

Duhigg’s insight provides evidence that wellness programs do indeed have a significant impact on workplace productivity and engagement, making this finding more interesting than it may initially appear.

A points-based rewards system was the second most-desired type of engagement program, with 24.7 percent of responses. Understanding employees’ desire for points-based rewards systems is straightforward. By rewarding targeted behavior with points, businesses are providing employees with instant feedback about their workplace contributions, and rewarding workers for continued persistence. In this case, points become a type of office currency, and their instant nature adds new life to mundane or time-consuming tasks.

A progress tracking system places third behind points based reward programs, with 17.4 percent of respondents selecting it as the type of engagement program they would most like to participate in. The power of progress is one that’s been well documented,7 and actually motivates many employees more than financial rewards, social recognition, or promotions. As it relates to gamification, a progress tracking system can help employees visualize their progress over the weeks, months, and years they contribute to their job. Without such visual representation, it can be difficult for employees to appreciate all that they’ve accomplished.

Internal social networks and leaderboards were the two least-selected options by respondents. In particular, the low ranking of leaderboards challenges the idea that greater workplace competition will motivate employees. Certain studies have actually suggested that leaderboards cause disengagement among employees who don’t place near the top. A low ranking can then turn into a self-fulfilling prophecy as employees become discouraged and fall farther behind their peers.

This question yielded different overall conclusions when broken down by age. The majority of respondents between 18 and 34 confirmed that they actually do use some type of employee engagement programs at work. However, the data shifts as the respondent’s age increases. Only 23.7 percent of 35-44 year olds confirmed they use employee engagement programs at work, and only 18.4 percent of 45-54 year olds said the same.

Gamification has firmly embedded itself in the mindset of business technology pundits and managers alike. The initial excitement around the technology appears to be receding, but the state of employee engagement clearly leaves large opportunities for systems and strategies that increase worker motivation.

Some deficits in motivation may stem less from the employee and more from their environment.

In the 1920s Austrian sociologist George Elton Mayo discovered that workers in assembly lines responded positively to changes in light brightness. But it wasn’t the actual brightness that motivated workers, it was the idea that their managers were paying attention to them that made them work harder.8 It’s this lack of supervisor attention that may be a main cause of disengagement for so many modern day employees. Gamification software can help alleviate the disconnect many employees feel from their supervisors by providing instant, positive feedback – the kind of feedback and recognition that positively reinforce behavior.

The majority of workers believe that engagement programs would help them at work. Engagement can be a relative term, so the exact application of gamification can vary a great deal. Based on the data collected, better recognizing workers for their contributions, making mundane work more inviting, and providing a visual record of workplace progress are all major opportunities for current businesses.

In addition, implementing employee engagement is a nuanced process. The type of system that employees find desirable is not consistent across departments – a trend that would likely also manifest itself in departments outside the scope of this survey, such as Human Resources and IT. Additionally, older employees are much less open to engagement programs, which could be due to familiarity or the type of positions occupied by older employees. It’s less likely that managers, directors, and other high level employees will need (or respond to) motivation software.

Given the results of this survey, employers should embrace this trend.

Are you looking to implement an employee engagement program at your office? Call us at (877) 824-6745 for a free consultation, or browse our comprehensive listings of engagement software vendors.

For more information about this survey, the methodology, or questions asked, please contact Media Relations Manager Keith Cawley at keith.cawley@technologyadvice.com 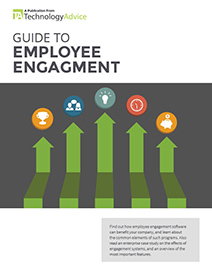 Learn more about the benefits of Employee Engagement with our market-leading research.