“That’s the beginning of the end. Now you have someone on board who doesn’t do anything. They just coordinate. And they have an interest in making sure there is always something to coordinate. So they start inventing problems that don’t really exist. We don’t have interdepartmental project managers. The people who actually do the work do that.”

That’s Nir Zuk’s withering summary of why his company Palo Alto Networks doesn’t employ project managers, which was part of a Forbes profile on Zuk. Palo Alto Networks is renowned for significantly moving firewall and intrusion prevention technology forward, so the man knows something about executing large, complex projects.

Zuk’s point encapsulates a number of arguments against project managers, and his disdain isn’t unique. The emergence of flat or horizontal organizations that rely on autonomous teams – like Basecamp parent-company 37 Signals, Github, and gaming company Valve – signifies an emerging movement against the idea of dedicated project managers.

It’s also becoming clear that Millennials, who will make up the majority of the workforce in the coming decades, don’t appreciate hierarchy simply for hierarchy’s sake. Their continual access to technology has engendered an intrinsic need for meritocracy – simply because someone has a higher title doesn’t mean Millennials will assume they have infallible expertise.

Point: Get the right people and you won’t need project managers.

Zuk elaborates: “You let people make decisions. But you need to have the right people to do that. A lot of people can’t do that. People who aren’t ‘A’ players do not fit into that scheme.”

“hierarchy is the enemy of agility”Again, the Palo Alto CTO’s strategy relies on a lack of hierarchy and a healthy dose of agile decision making. In Zuk’s mind, hierarchy is the enemy of agility. Jason Fried, the founder of 37signals, also seems to come to the same conclusions when reflecting on why his company parted ways with a capable employee who expected managerial responsibilities.

Fried admits that moving from a start-up to a medium sized business has strained his company’s flat model, but he recalls another failure when he hired a project manager for the customer service team:

“What we learned is that adding a dedicated manager and creating a hierarchy is not the only way to create structure. Instead, we decided to let the team be entirely self-managed. There’s still a team leader, but that role rotates among the team every week.”

For these innovative organizations, maintaining a lean build that focuses on speed removes the necessity for mainstay project managers with PMBOK degrees. For them, if you’re not doing the work, you shouldn’t be managing the projects.

For Zuk and other leaders dedicated to flat organizations, the term “A player” plays a massive part in the success of their organizations. Democratizing leadership and project decision-making requires a high level of expertise, not to mention objectivity, among every project team.

It also takes a great deal of work to strategize direction and consider the project management triumvirate of scope, cost, and schedule, especially given the complexity of modern IT projects.

While trumpeting workforce engagement and dedication is enviable, survey data reveal that some 50 percent of US employees feel overworked or overwhelmed on a consistent basis. This same study also reports that 29 percent of respondents reported they often had no time to reflect on their work.

A lack of reflection or time will certainly increase the likelihood of making poor decisions that in turn lead to hiccups in the project.

While so-called “A players” may have the ability to turn on a dime and consider an expansive view of each project they’re working on, the majority of American employees don’t seem to have the time to play that role. Naturally, this leaves a gap for who will manage project responsibilities like communication, coordination, and other pertinent strategies.

Complexity is one of the key reasons projects fail, so it’s difficult to justify putting such important decisions into the hands of overworked employees struggling to focus on their current tasks.

As the Dilbert cartoon demonstrates, the concept of project managers from a theoretical perspective can sometimes feel like a paradox. If an ambitious employee wants to move quickly with innovative ideas, PMs can become a barrier rather than a resource. If the team is highly motivated and performs well without hierarchical structure, the role starts to look redundant.

“Project managers are broken cogs in the process of innovation”Fried sums this up nicely, saying of 37signals flat structure: “One of the things I like about the arrangement is that it frees us from the often toxic labor-versus-management dynamic, in which neither party understands what it’s like to be on the other side. This is where you’ll find a lot of conflict in companies.”

Survey data seem to support his theory: Gallup’s State of the Workplace survey for 2013 showed a significant amount of responses complaining about “bosses from hell who ignored talent and didn’t cultivate growth.”

In this sense, project managers are no longer fulfilling their role as facilitators, but are instead broken cogs in the processes of innovation and productivity. In an era where agility is treated with the same kind of reference as innovation, having team members that actually stifle speed could be considered unforgivable.

In 2008, Google was struggling with the same management versus labor battle that Fried illuminated. Basically, Google’s engineers couldn’t stand their managers, because the PMs couldn’t perform the work and therefore – in the engineers’ minds – didn’t understand the work.

In true Google fashion, the company set out to test their engineers’ claims with data.

The results of Google’s largest internal, employee-facing study revealed that not only are managers* foundational to the corporation’s structure, but talented managers actually increase job satisfaction, talent retention, and employment within their departments.

Here are their eight requirements for successful PMs: 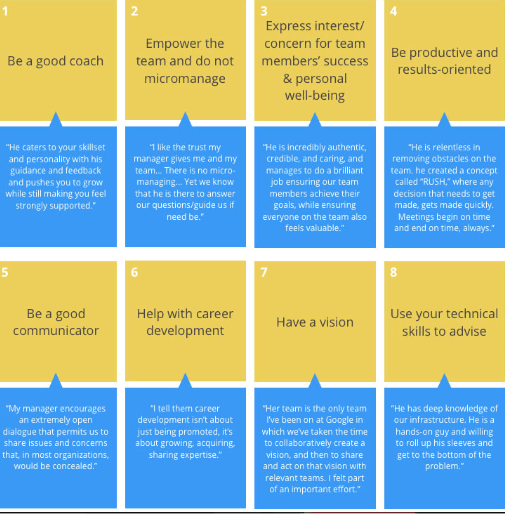 If Google’s research tells us anything, it’s that project managers can actually be quite important to the success of an organization, for its culture and productivity. However, it’s important not to discount the observations of successful companies like 37signals and Palo Alto Networks that have found success without any permanent PMs.

So what’s the answer? An issue that’s so often painted as black and white actually lives in a much grayer area.

Being a project manager is difficult, and not everyone is well suited to the role. Placing inadequate personnel in PM roles can have a disastrous effect on the organization, and some employees may reject hierarchical management altogether.

When done well project management plays a critical role, but it’s not for everyone. Organizations have functioned just fine without it, but for a good majority of companies, especially larger enterprises, project management still seems very necessary.

*Google’s study was broader than just project managers, and included all forms of management.