(Note: you can download our full study at the bottom of this article!)

Customer loyalty programs have been a staple of coffee shops, airlines, and grocery stores for years, typically in the form of credit cards or special punch cards. Recently, as consumers have begun to move towards digital and mobile-first payments, the nature and scope of loyalty programs has been shifting.

New startups are taking the principles of traditional loyalty programs and incorporating new technology. Inspired by gamification, these vendors offer smartphone applications that reward users for “checking-in” at physical stores, or provide limited time discounts based on individual profiles and data analysis. Other platforms specialize in website-based loyalty programs (or communities) that offer points and rewards for site-interaction.

These new services are expanding the reach of loyalty programs to small and medium businesses that have previously lacked the resources and capabilities to implement cohesive rewards programs. Some solutions even allow users to collect points at any business in their network, and redeem them at any other business – forming a type of loyalty point exchange, or market.

Inspired by these developments, and hoping to learn more about consumer preferences towards digital loyalty programs, we surveyed 3,162 loyalty program users across the US. Each of the six questions was answered by at least 387 people.

Saving Money is the Primary Reason for Participation 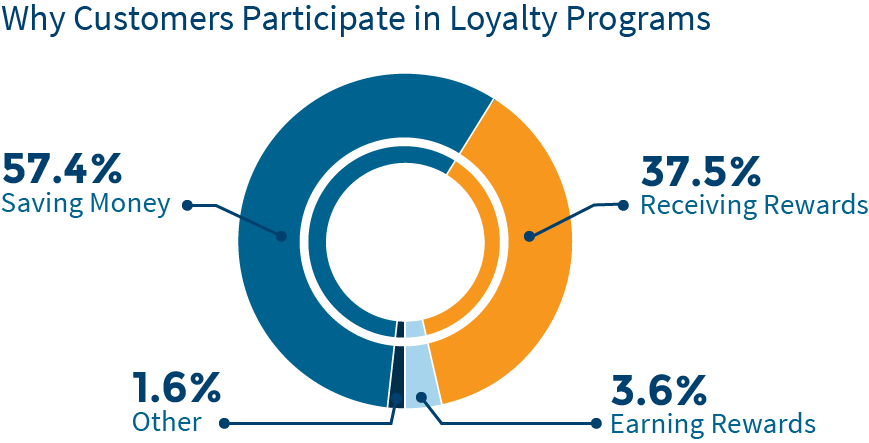 We first wanted to establish what motivated people to join loyalty programs. The clear takeaway is that most consumers join programs hoping to save money, or receive discounted products. This is in line with grocery store rewards cards, which offer small discounts on numerous in-store products. This also offers a straightforward model for businesses that wish to tap into this market – offer a loyalty program, either card-based or digital, that provides discounts on a select (and ideally, changing) set of items or services.

The second most cited reason for participation was receiving rewards. This is the strategy employed by companies such as Starbucks with their My Starbucks Rewards system. Instead of offering consistent discounts, consumers can build up points, which can then be redeemed for rewards or free products. This is a strong choice for companies that feel a discount system is at odds with their business model.

Earning VIP status came in as a distant third preference, while social recognition was cited by just 0.8 percent of respondents. Given these results, we suggest pursuing such strategies only for extremely niche interests, or business models.

In order to gauge consumer interest in the emerging field of digital-based or digital-enhanced loyalty programs, we asked if people would be more or less likely to join a loyalty program that offered a smartphone app.

This is particularly interesting for companies looking to expand the effectiveness of their card-based systems, or increase adoption of their physical rewards programs.

Consumers Are Undecided about What Type of Loyalty Program They Prefer

While offering a smartphone app puts you ahead of many current loyalty programs (many businesses rely on punch-card system or lack a program all together), we wanted to see if customers were ready for fully-digital programs, or whether card-based programs remained a low-tech favorite. 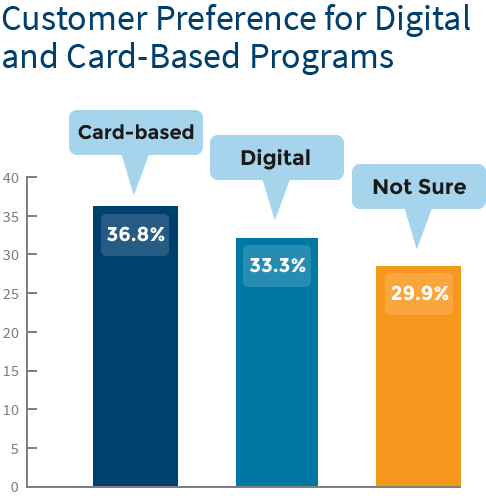 The results ended up being too close to call, but trending towards card-based loyalty programs. Consumer preference is roughly split between fully-digital programs (that exist only as apps or web programs) and card-based programs. An equal amount of consumers are undecided, or have no preference.

Consumer’s continued preference for card-based programs may be surprising, given their overwhelming preference for loyalty programs that offered smartphone apps. This indicates that most consumers want smartphone apps as a feature of loyalty programs, but may not want to use an app exclusively, or completely forgo the convenience of a physical card.

Given the continuing shift to mobile devices for everything from web-browsing to shopping, we expect that preference for fully-digital programs will only increase in coming years. However, the current lack of consensus bodes well for companies such as Belly, which offers a hybrid system of physical rewards cards tied to a digital network.

Social Rewards are Not a Desired Feature

To determine what type of rewards consumers are most interested in (beyond simply saving money), we asked people whether they would be more or less likely to participate in a loyalty program that offered social rewards (such as FourSquare-style digital badges). 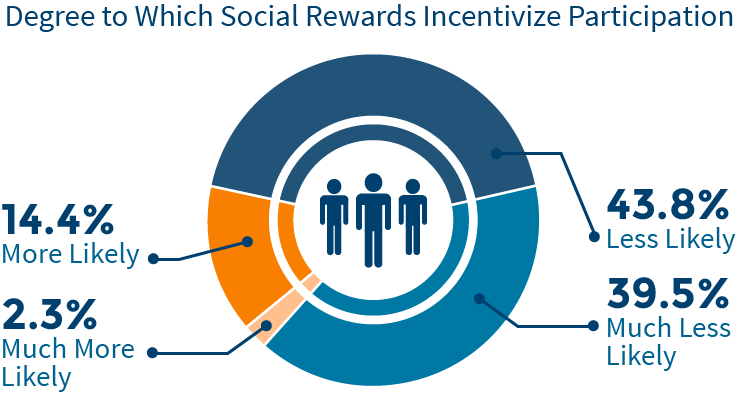 The results are not encouraging for companies that base their loyalty offerings around such rewards, or rely on such features for engagement.

This is likely due to a perceived lack of value in such rewards, either intrinsic or extrinsic, and possibly consumer fatigue over apps such as FourSquare (which recently removed their social branding, it should be noted). This trend seems unlikely to reverse.

We also gauged consumer interest in exclusivity-based rewards, like VIP status. When asked whether they would be more or less likely to participate in a loyalty program that offered such rewards, here’s how they responded: 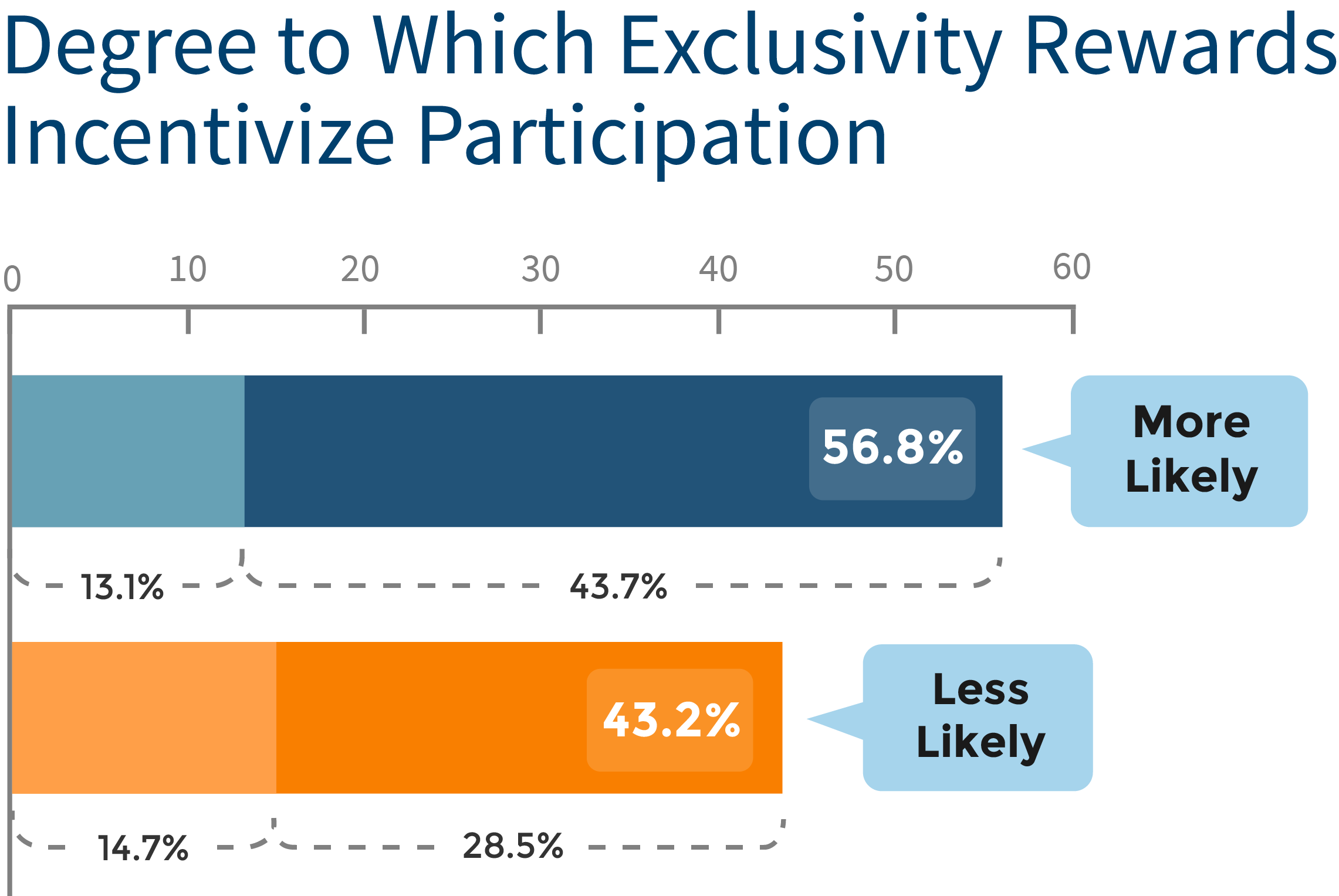 Consumers show a strong desire for these type of rewards, especially when contrasted against their preference for social-based rewards. 43.7 percent of consumers indicated they would be more likely to participate in a program that offered VIP status, or related perks. That number rises to 56.8 percent when factoring in respondents who were “much more likely.”

Only 43.2 percent of respondents, meanwhile, indicated they would be either less likely or much less likely to participate in a program given this type of incentive.

Such preferences are encouraging for businesses and vendors whose loyalty programs are based around rewards, or exclusivity-based perks. While consumers prefer saving money overall, they also show a strong preference for VIP-style incentives. Given this data, businesses implementing loyalty programs should consider a “tiered” or level-based system, in line with typical airline programs or Starbuck’s My Starbucks Rewards.

We also wanted to gauge the effectiveness of loyalty programs at enticing members back to the store, and whether current loyalty program users sought out such opportunities at other businesses. 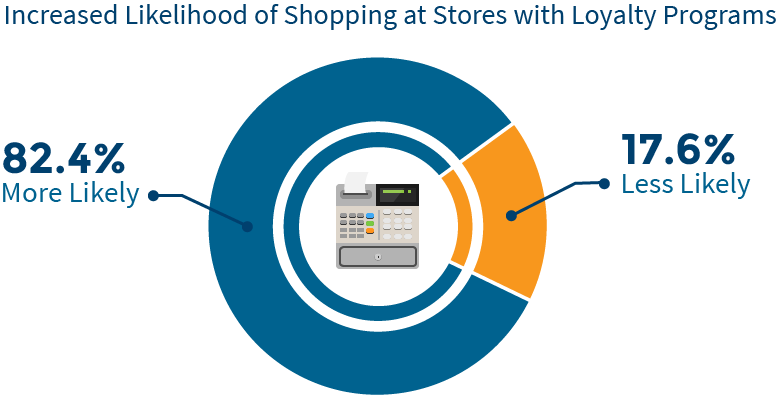 The results show an overwhelming consumer preference for stores that offer loyalty programs, and suggest that once consumers “buy-in” to a loyalty system, they are highly likely to reward the company with repeat business.

These results should ease concerns about the staying power or effectiveness of a consumer loyalty program. Overall, 82.4 percent of respondents said they would be “more likely” or “much more likely” to shop at stores that offered loyalty programs. Only 17.6 percent of consumers indicated they would be either “less likely” or “much less likely” to do so.

Card-based loyalty programs are a tried-and-true marketing tactic, that have been in use for years. The industry to date has undergone little transformation. However, with the recent rise of smartphones, omnichannel marketing, and gamification, there are a host of innovative companies trying to rethink the traditional rewards program.

Based on the responses we collected and analyzed, consumers are not only open to, but welcoming of such efforts. While consumers appear to be unsure of fully-digital rewards programs, and are decidedly against social rewards, there’s widespread desire for both smartphone apps and exclusivity-based incentives.

Businesses looking to implement loyalty programs should first consider vendors that offer a hybrid system of physical cards tied to a digital network. This allows consumers to enjoy the benefits of both systems, such as smartphone access to coupons or location-based discounts, along with the convenience of a keyring swipe-card. A fully-digital program could appeal to more connected-consumers, and the loyalty industry is likely moving in this direction (based on overall mobile adoption rates). However, given consumer’s remaining loyalty to traditional card-based programs, we recommend that businesses’ gauge interest with their immediate customer base before launching a full scale, digital-only program.

For more information about this survey, the methodology, and questions asked, please contact Media Relations Manager Keith Cawley at keith.cawley@technologyadvice.com. 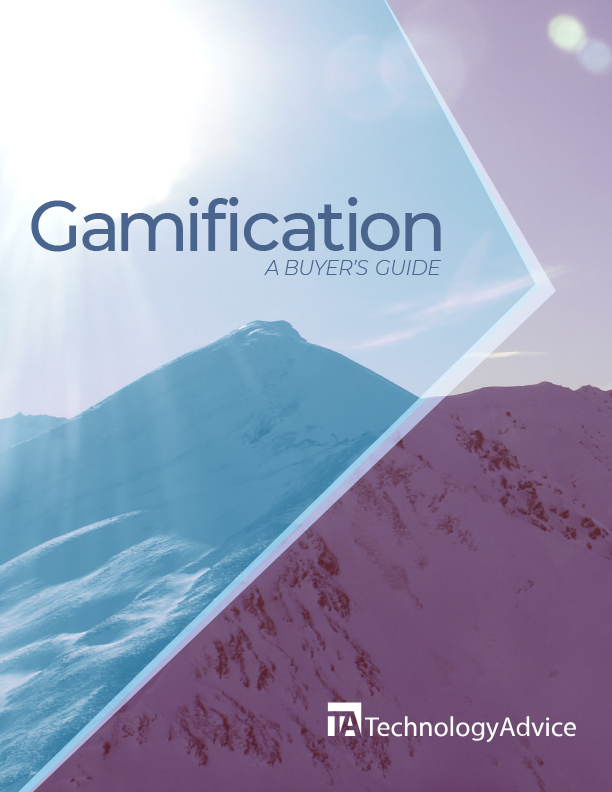