Coming to Nashville for the 2016 SiriusDecisions Summit? Lucky you: Lonely Planet recently rated Nashville as one of the world’s top 10 cities to visit. Nashville also happens to be our hometown. Since you’ll be here anyway, we’ve put together this list of restaurants, events, and other attractions to check out when you aren’t attending breakout sessions, keynote presentations, etc.

At the Gaylord Opryland

Gaylord Opryland — one of the largest, most opulent hotel/convention center facilities in the world — is the host venue once again for this year’s SiriusDecisions Summit. Opened for business in 1977, the building and its 2,881 rooms were heavily damaged in 2010’s historic flood. When you walk through the beautiful Cascades sector of the hotel, you can imagine how it looked under several feet of water: 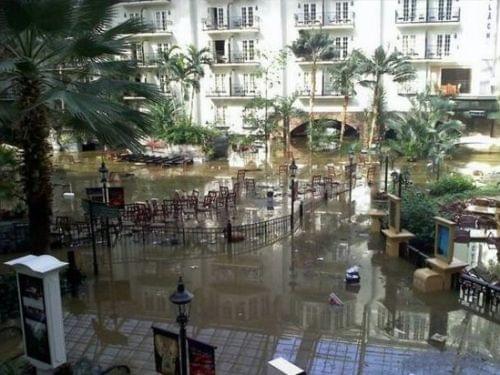 Dried out, bigger, and better than ever, the Gaylord Opryland offers SD Summit attendees service at sixteen separate dining concepts (though some share seating areas). If you can’t leave the venue, you’ll still have everything you need. Most of the restaurants are casual dress and accept walk-in patrons, excepting Old Hickory Steakhouse, which requires reservations and “smart casual” attire. Here are the top five options, in no particular order. For a comprehensive list, click here.

The Gaylord Opryland Hotel is a short, 10-minute drive from both the airport and downtown — convenient for those with access to a car, but there aren’t many attractions within walking distance. If you don’t have a rental and don’t want to bother with a taxi, Lyft, or Uber, here are some nearby options for dining and entertainment:

If you look at the map above, the Grand Ole Opry is just north of the Opry Mills Mall. Home of the Grand Ole Opry, “the show that made country music famous,” since 1974, this historic building was also damaged in the 2010 Nashville flood, but quickly restored and re-opened. If you want to visit the Opry while you’re in town, you have several options:

With eight or more artists on each show, every Opry audience is treated to a sample of music from a dynamic line-up of new stars, superstars and legends of country music. It’s no wonder this live radio show has been entertaining people for nearly nine decades. Please note that due to the nature of the Opry, a complete artist line-up is not posted until the week of each show and, even then, may change.

Available for purchase here two weeks in advance, guided backstage tours of the Grand Ole Opry House give visitors a behind-the-scenes look at operations, dressing rooms, and other areas that are usually off-limits to the public. Tours sell out quickly, so if you’re coming into town on Tuesday, your two-week window starts May 10th. Adult tickets are $24, and daytime tours begin every 15 minutes, from 10:00 a.m.–6:00 p.m. VIP pre and post-show backstage tours are also available to those who have purchased a ticket for that night’s performance, and tours are limited to 10 fans at $125.00/ticket. Only a few VIP tour tickets remain for the dates you’ll be in town, so if you’re interested, go here to find out more.

If you do decide to venture out of the hotel and its surrounding area, your options for dining, tourism, and entertainment multiply exponentially. While you can’t see everything Music City has to offer while also attending the conference, here are a few highlights to consider for what limited downtime you’ll have. 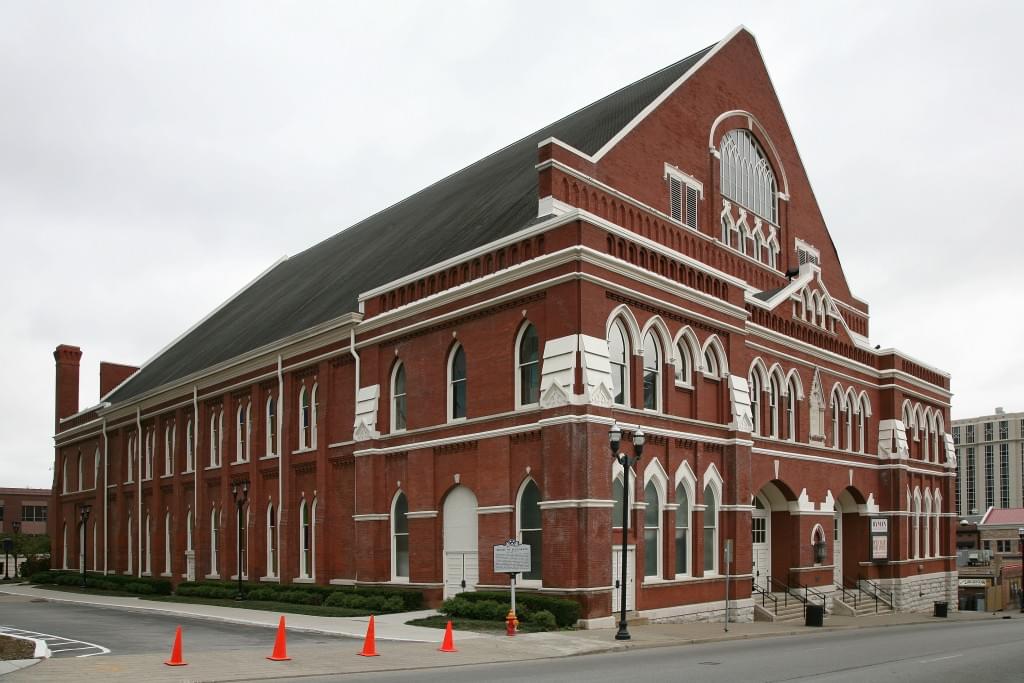 Known as the “Mother Church of Country Music,” the Ryman Auditorium is renowned around the world for the rich acoustics and intimate setting it has provided speakers and entertainers since 1892. Originally known as the Union Gospel Tabernacle, this once-church was renamed for its builder, Thomas Green Ryman, upon his death in 1904.

The Ryman has hosted performances by the Metropolitan Opera, John Philip Sousa, Enrico Caruso, Harry Houdini, and Bob Hope, in addition to thousands of contemporary artists. It is the birthplace of bluegrass, was the home of the Grand Ole Opry from 1943–1974, and is currently ranked 25th in the world and 19th in the U.S. by ticket sales (according to Pollstar), even though it only accommodates 2,362 concert-goers.

Guided and self-guided tours are available from 9:00 a.m.–4:00 p.m. daily, and adult tickets are $30 and $20, respectively. Click here for more information or to book Ryman tours. The Ryman is 12.4 miles from the venue, approximately 17 minutes by car (Google Maps directions). 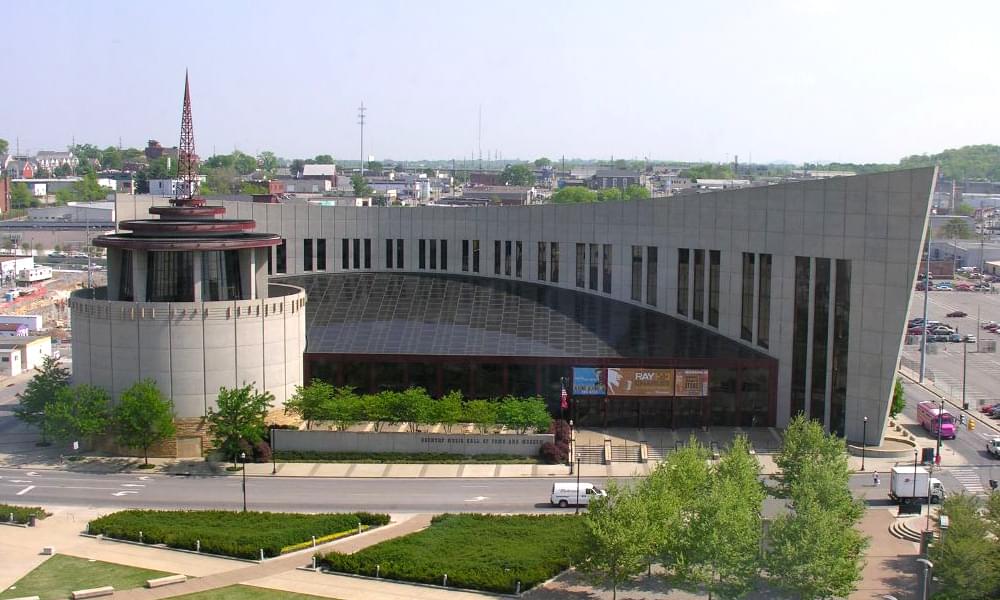 Originally built on Music Row, the Country Music Hall of Fame and Museum opened in its current, downtown Nashville building in 2001. Designed to be entertaining even for those who don’t like country music, the facility is open to the public from 9:00 a.m. to 5:00 p.m. daily. Tickets (available here) are $24.95 for adults. A 60-minute audio tour can be purchased for $5, or is included for free in two ticket packages.

The facility offers a large number of standing exhibits on historic country, folk, and rock music icons in addition to rotating, in-depth feature exhibits, more information about which can be found here. Be warned, a new Blake Shelton exhibit will be debuting while you’re in town (27th), so it might be busier than usual. The Country Music Hall of Fame and Museum is 11 miles from the venue, approximately 15 minutes by car (Google Maps directions). 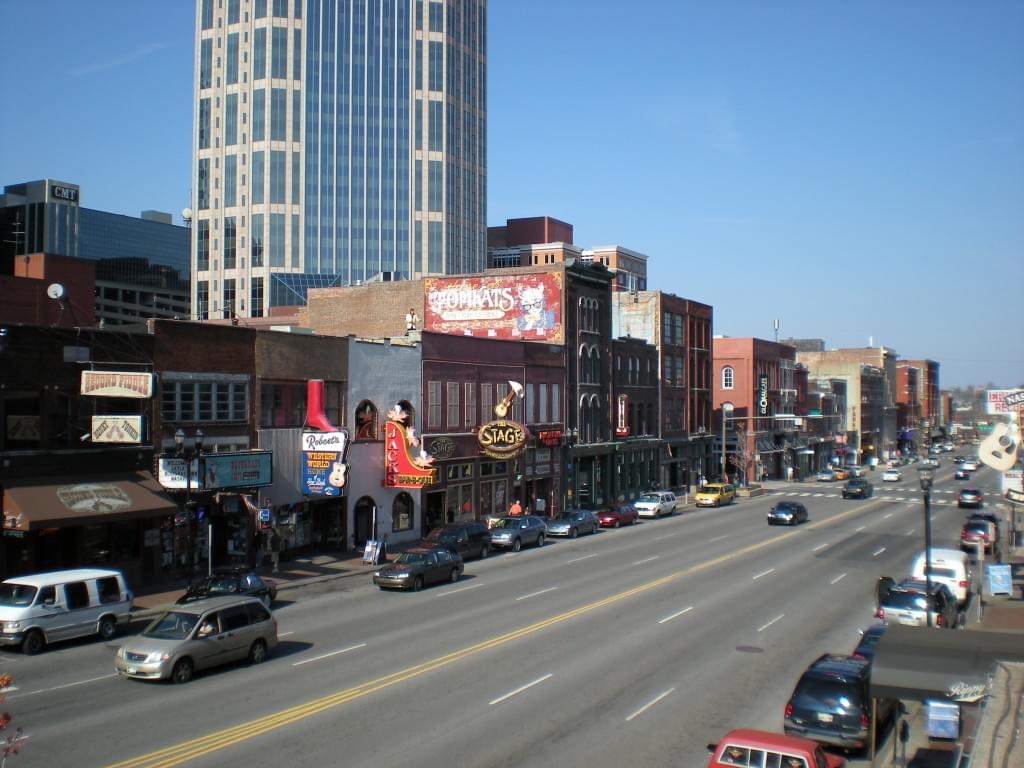 The hub of Nashville nightlife, Lower Broadway runs from 5th Avenue to the riverfront and is Home to Nashville’s famous honky-tonk bars. You’ll find the libations and live music flowing until 3 AM, seven days a week. Lower Broad is roughly 10 miles from the convention venue (Google Maps directions). If you’re going honky-tonking, we suggest you start with the ones below:

Note: Nashville still allows smoking in 21-and-up bars, so you will probably encounter smoking in or around all of the bars on Lower Broadway.

Located at 1711 Division St in the heart of ‘The Gulch’ neighborhood (Google Maps directions), The Patterson House is among the city’s best and most inventive cocktail bars. A small, speakeasy concept, it fills to capacity quickly, though that doesn’t deter patrons from waiting up to an hour to pay $12+ per drink. The Patterson House is open from 5:00 p.m.–1:00 a.m. Sunday–Wednesday, and 5:00 p.m.–3:00 a.m. Thursday–Saturday. Make sure to try the Bacon Old-Fashioned or their take on a classic Negroni. 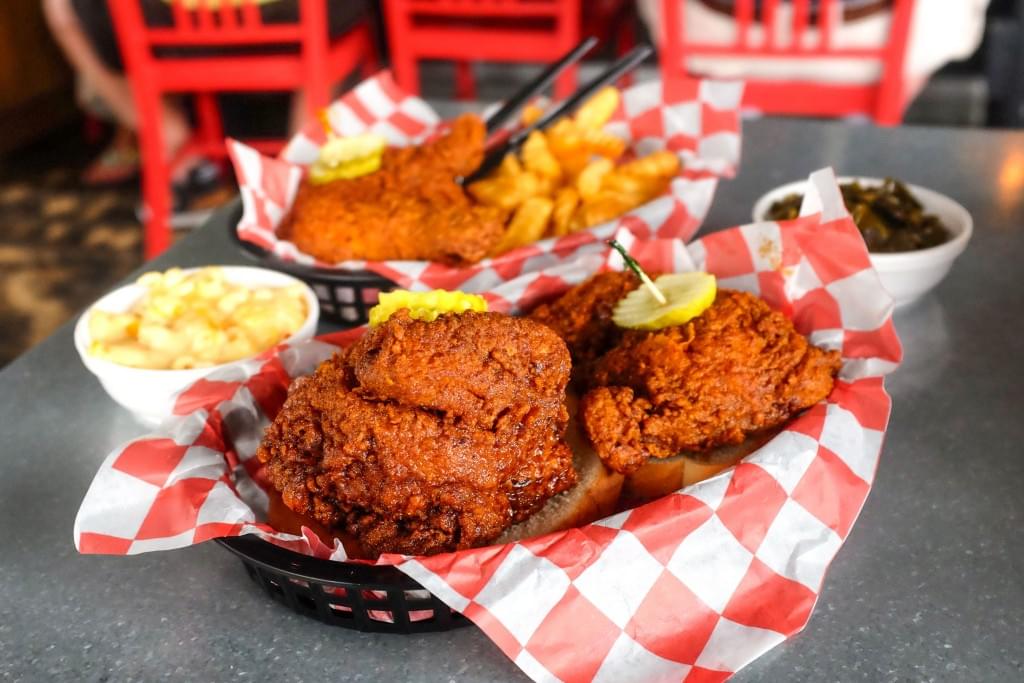 Nashville hot chicken was invented, as legend would have it, during the 1930s by the wife of Thornton Prince, who tired of his philandering ways and sought to punish him for his transgressions by making him the spiciest fried chicken imaginable. Unfortunately for her (and fortunately for the rest of us) Mr. Prince loved the heat, and shortly thereafter, began selling it to other Nashvillians, who fell in love as well. Prince’s Hot Chicken is still in business today, but its north Nashville location isn’t the most tourist-friendly neighborhood.

Unless you must have the original, Hattie B’s is your best option. Taking the original concept and improving it, Hattie B’s offers several levels of heat, all the way from non-spiced “Southern” to the nigh-inedible “Shut the Cluck Up.” If you’re trying it for the first time, we recommend ordering the tenders, one heat level below what you’d normally expect to enjoy. Try the pimento mac-and-cheese and collard greens, too. Hattie B’s has several Nashville locations, though we recommend the Midtown location at 112 19th Ave. S, open from 11:00 a.m.–10:00 p.m. Monday–Thursday, 11:00 a.m.–Midnight Friday–Saturday, and for brunch on Sunday from 11:00 a.m.–4:00 p.m. It’s approximately 12 miles from the Gaylord Opryland (Google Maps directions). 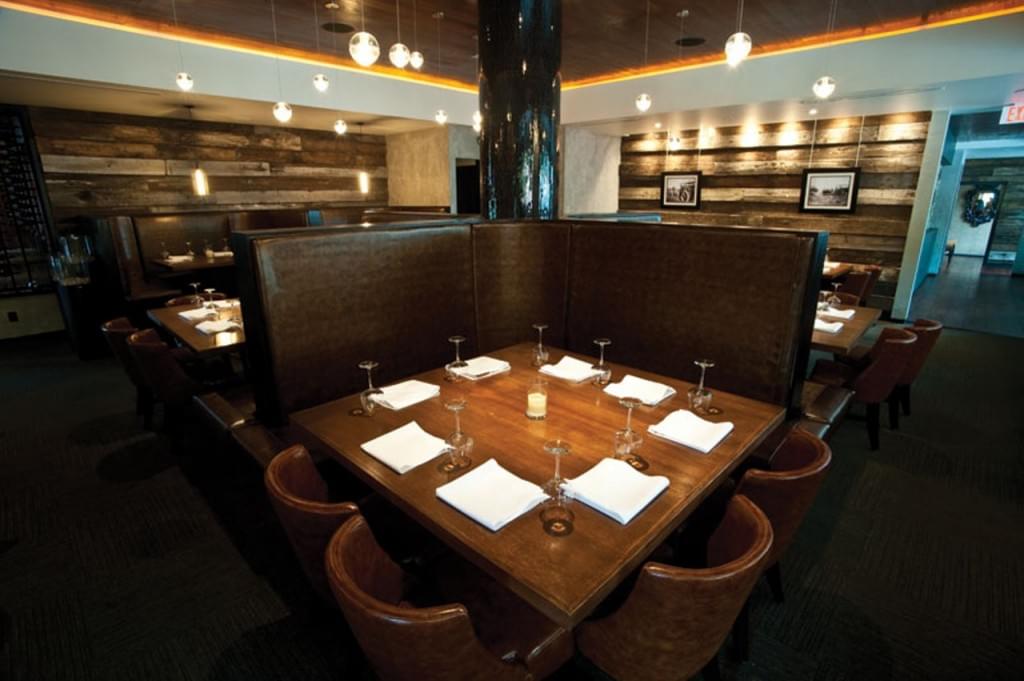 If you need to impress a client with dinner while you’re in town, Kayne Prime is the area’s premier steakhouse. The service is second to none, as is the American Wagyu beef and impeccable wine list. A true fine-dining establishment, there is a dress code, albeit relaxed (no shorts, tank tops, or open-toed shoes on men). As Nashville is a tourist town reservations are highly recommended. Try the House-made Bacon with Maple Cotton Candy, Canoes of Beef, and any of the bone-in cuts of beef. Kayne Prime is approximately 12 miles from the venue (Google Maps directions), located at 1103 McGavock St. on the edge of The Gulch. It’s open from 5:00 p.m. – 10:00 p.m. Sunday –Thursday and 5:00 p.m.–11:00 p.m. Friday and Saturday. 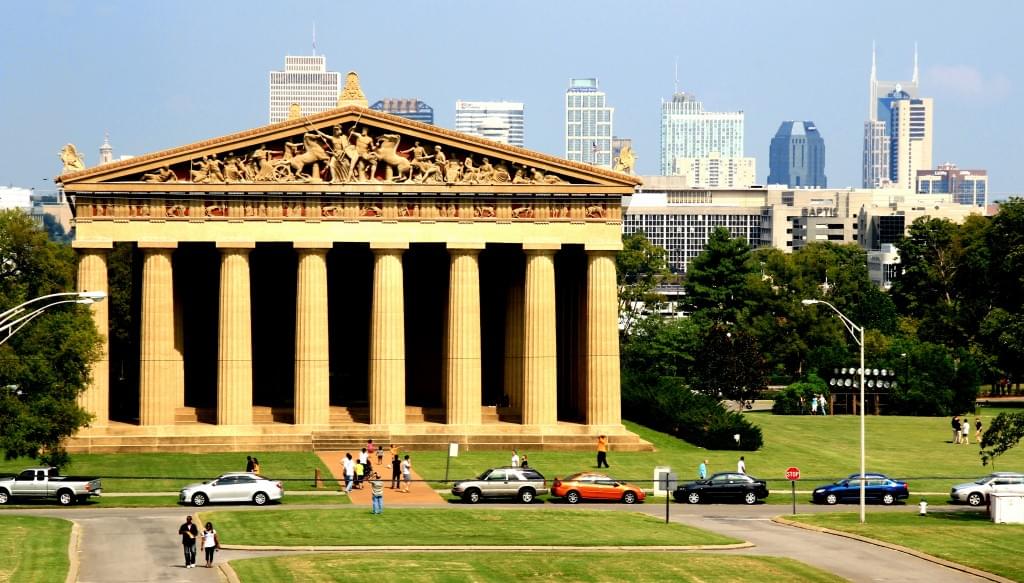 Finally, if you’re looking for a place to get out and enjoy the spring weather, Nashville’s Centennial Park, home to a full-scale replica of the Athenian Parthenon, has been a favorite of Nashvillians since it hosted the state’s centennial celebration in 1897. Located on West End Avenue at 25th Ave. N, across from Vanderbilt University, it’s approximately 14 miles from the convention center (Google Maps directions).