It happens every year: marketing leaders review their department’s spend over the last twelve months in preparation for next year’s budget proposals.

ALSO READ: 5 Strategies Every CMO is Planning for 2016

The case for creating a lead generation budget that gets approved isn’t difficult to make. Everyone wants more resources because no one wants to be told to do more with less. 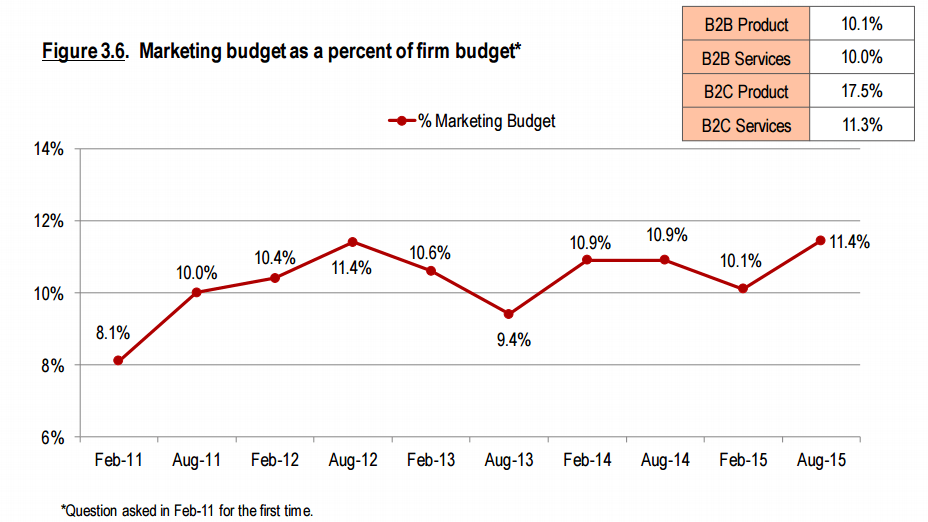 Marketing budget allocation is on in the rise.

For marketers, the trends in resource allocation look promising. The CMO Survey reports an increase from 10.1 percent to 11.4 percent in marketing spend as a total percentage of the firm’s budget. Results from Demand Gen Report’s 2015 Benchmark Study are even more optimistic: 76 percent of respondents said they expect their marketing budget to increase by at least 1-10 percent.

For demand generation marketers, this is a big opportunity to acquire more budget, which allows you to rake in more leads and grow marketing’s stature within the organization. However, there are fundamental steps to follow in order to deliver a logical budget that withstands the CFO’s critiques.

From a traditional perspective, marketing has been viewed as a cost center. Discussions around marketing investments focused on cost instead of return because marketers were unable to effectively track and prove their contribution to the organization’s bottom line.

Today, marketing is characterized by data usage and an increasing focus on delivering leads who turn into customers and grow revenue. Consequently, your budget proposals must request additional resources insofar as they contribute to an increase in your KPIs that relate to sales productivity or business goals (e.g., leads generated, revenue contribution).

The simplest way to make this argument is to create a forecast for KPI increases and sell your budget as a way to achieve this aim. Now instead of saying, “This marketing initiative will cost X amount,” you’ll be saying, “We can achieve these goals and deliver X value if we have these resources.”

When you focus on ROI, the narrative changes.

Divide your overall budget into two parts: team growth and campaign expenditures. The distinction between the two is important, and their value must be explained in different ways.

Growing your team means a variety of things: hiring more individuals, developing some of your current team members, and deploying new technology within the department.

Hiring a new team member should be justified by the increase in scale they can bring to campaigns with proven effectiveness. For example, if you’ve found that video content has delivered steady leads from YouTube, make the case for hiring another digital media specialist by forecasting the number of leads that could be generated if your team could up their video production.

Apply the same logic to a new piece of marketing technology. If you want to increase the lead quality on those video campaigns — rather than just the lead volume — you’ll need to implement video analytics software to track exactly how long each lead watched your video and adjust accordingly. Though the logic is the same, the argument for each expenditure is distinct.

In terms of campaign expenditures, there are two broad types: lead generation and branding. This may seem like an obvious distinction to the revenue minded among us, so let’s first examine why branding is important for the company’s bottom line.

Logically, branding is vital to the way buyers make decisions. Once a problem is identified and a solution agreed upon, business buyers will develop a consideration set. The companies on the outside of that short list face an uphill battle to exert any influence over the buyer’s decision.

Branding is the largest expenditure for companies hitting their revenue goals.

However important branding is, it remains an enigma from a measurement standpoint. How can you attribute revenue to a page visit from three months ago that turned into a conversation with a sales rep at a conference that finally converted into a free trial and then a customer?

The truth is you could — but it would be very difficult, and impossible to scale.

It’s important to carve out a piece of your budget for branding because, as Hubspot’s research shows, it affects your revenue. But you must also emphasize the impossibility of measuring certain branding initiatives — at least until the next wave of analytics comes around.

The final piece of your budget is the simplest to measure, thereby making it the easiest to lobby for. Lead generation campaigns are designed to deliver a certain return. Whether you’ve created a marketing automation/CRM closed-loop environment or are using some other end to end analytics, future results of lead gen campaigns should be easy to forecast once you find the right campaign formula.

The decision then becomes whether to focus on acquiring new leads or nurturing the prospects in your database. In truth, you should always do both, but the distribution in resources between the two will change based on your company’s circumstance.

Howard Sewell, president of Spear Marketing, advocates for an 80/20 split one way or the other based on two scenarios:

1. Your company is a market leader and has an extensive database.

2. Your company is a startup and needs new clients.

When you’re in the SMB market, getting new clients is a boom or bust undertaking. If you don’t bring in enough revenue to cover the price of doing business, the company will shrivel and budgets will disappear. Obviously, lead generation is the priority here, while lead nurturing can supplement your efforts by converting long term prospects.

This logic is sound but superficial, and Sewell readily admits that most B2B companies don’t fit neatly into either one of these categories.

For example, enterprises or mid market companies may focus more heavily on lead generation when they launch a new product or partner with a new marketing vendor. Similarly, startups may keep the nurturing aspect of their budgets higher if they want to invest in onboarding free trial sign-ups so they become long term customers.  Your company’s goals will guide how you balance your lead generation and nurturing budget.

Developing a marketing budget isn’t easy, but it’s imperative to defend your resources if you’re going to keep growing your team and shouldering more responsibility for organizational growth.

If you need an example, just consider that Salesforce spent 53 percent of its revenue in 2014 on sales and marketing. Marketing deserves a decent lead generation budget; you must simply make a compelling enough case.