But your lead generation is still failing.

What’s hamstringing your efforts? A lack of perseverance.

Lead generation isn’t viral marketing; it’s not designed to produce overnight success. Therefore, grit in the context of lead gen is essential if you’re going to find success. Without it, you’ll abandon ideas too quickly or succumb to the stubbornness of a particular obstacle, which means you won’t build the polished marketing machine of your dreams.

Recent studies in social science have articulated that intelligence, or more vaguely, talent, isn’t the main predictor of success in life. Instead, it’s someone’s penchant for grit, which can be loosely defined as passion and perseverance for long term goals, that is the best indication of success.

Angela Lee Duckworth, one of the main psychologists behind the research on grit, breaks down the primacy of this characteristic over others in the TED Talk below:

The Finite Nature of Best Practices

As marketers, we scour the web for best practices, download voluminous ebooks, and attend conferences in search of the magic formula that will turn wilting efforts into fertile campaigns. In essence, we’re searching for talent in hopes that someone more capable can show us how to succeed at lead generation.

Certainly there are established ways of building successful lead generation campaigns, and they should be adhered to up to a point. But at a certain moment, the expert ideas will run out, and you’ll simply need to keep working to dig up the right solution. At some point, you must break the mold and be the one setting best practices, not following them.

In lead generation, it’s rare that success happens as a landslide. The search for the secret formula is a pipe dream. The minutia of each industry and audience is too great for one single “hack” to open the floodgates. Rather, it’s more likely you’ll hit your goals through a marathon-like series of small improvements.

To prove the utility of grit to lead generation, let’s examine a couple scenarios where pivoting would have been easier than perseverance — even though success could have been reached through the latter.

According to analysis from Parse.ly, the average lifespan for an online article is 2.6 days. (Lifespan in this context refers to when an article reaches 90 percent of its page views.) Now, this data must be taken with a grain of salt because a significant portion of the articles were likely news-related, meaning they weren’t formatted for lead generation.

However, the general trend is still troubling. 2.6 days is a measly return for the work put into a well written article. You can’t generate many leads like that.

What’s the main cause? The generally low quality of writing on the internet undoubtedly plays some part; a lack of commitment to content promotion could also be a major factor.

“People get audience and strategy down, they’re producing enough content or decent volume levels, but they can’t seem to get any earned media or traffic or leads generated from that content,” says Kane Jamison, founder of Content Harmony.

“People just don’t spend the time to do it or they focus on ‘Let’s just get this out,’ and then move on to the next piece of content. One thing we’ve been doing is not publishing a second piece until the last one we’ve worked on has hit 500 pageviews. That forces you to work.”

If your content isn’t raking in the leads you thought it would, that doesn’t mean the work is below par or mistargeted. It could simply be that you need to spend more time promoting the article and giving it a better platform to generate leads.

The same study by Parse.ly found social promotion added an average of 14 hours to an article’s lifespan. Now imagine if you committed to promoting your best lead generation piece for an entire quarter instead of chalking it up as a failure.

2. A/B Testing Without a Longview

Always be testing. It’s an axiom intrinsically tied to the mountains of data available to modern marketers. While the concept itself is sound — yes, you should be testing your landing pages and websites for conversion rate — the practice has been diluted by misleading content marketers to believe every test will be significant.

Unfortunately, that is simply not the case. For example, Appsumo was conducting frequent tests with a sizeable audience of 5,000 visitors per day. Some of the test yielded dramatic results, like a 5x increase in email conversions.

However, the reality of the situation is that only 1 out of every 8 tests drove significant change. This means that even if a test was statistically significant one way or the other, only 12.5 percent produced a major increase in desired results (think lead volume in this scenario).

Naturally, Appsumo’s conversion rate expert encourages patience and perseverance to find the results that you want. A/B testing is critical to lead generation, but it requires a healthy sampling of hard work and commitment.

In the end, the results can pay off. KISSmetrics went through a laundry list of A/B tests before they discovered that putting a check-box on their webinar signup form asking if the attendee wanted to talk to sales increased conversions to 10 percent.

The modern marketer needs grit, because failure is commonplace. The wilds of the internet are too varied and modern marketing strategies are too nuanced for every idea to work. What’s important is to forge ahead and to know when a strategy is worth supporting — even if it’s initially underwhelming.

A lack of grit, or an obsession with change simply for the sake of change is sure to sabotage your lead generation campaigns before you’ve had a chance to accurately determine if they’re inherently flawed or simply under-appreciated.

So what’s the one thing your lead generation is missing?

Simple: Perseverance in the face of failure and the recognition that there is no magic substitute for sustained hard work. 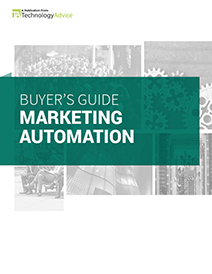 Learn more about the benefits of Marketing Automation with our market-leading research.