Why did you click on this article? Was it because the headline offered something you wanted, or was there another reason?

If you’re like most people, the correct answer is probably, “I don’t know why I clicked on this article.”

That’s because your subconscious mind actually makes a significant bulk of your decisions before you consciously make them. But it’s not just you.

In a 2008 study, scientists from the Max Planck Institute for Human Cognitive and Brain Sciences in Leipzig, Germany discovered that our subconscious minds often “predict” our conscious decisions seconds in advance.

This revelation plunged some people into existential crises amid doubts of free will, but for others, it inspired them to become better writers or just confirmed what they already knew. Ironic!

Giant philosophical implications aside, you can use these findings to your advantage to write better white paper titles. Here are some specific tips from scientists and news editors.

You must have known Buzzfeed was on to something other than helping Harry Potter fans find their Hogwarts houses. (I’m a Ravenclaw.)

Buzzfeed is known for long headlines that some people have denounced as clickbait, but as it turns out, science is on their side.

According to a Nielsen study commissioned by native advertising company Sharethrough, the longer a headline is, the better it performs. Just how long a headline needs to be to really grab someone’s attention, though, might come as a shock.

The study produced two significant findings (I’ll get to the second one in a minute), one of which showed that headlines between 21-28 words saw the highest engagement rates.

To put this into context, the last sentence is 29 words long. That’s a mouthful, but going off Sharethrough and Nielson’s research, a headline or title of similar length will probably work best.

Specifically, Context Words should make up about 17 percent of your total headline length. But what are Context Words, anyway?

Context Words were the second big discovery from the study Sharethrough and Nielson conducted. Comprising about 1,000 English words, these special words elicit strong emotional responses from people, which in turn leads people to pay more attention to them. 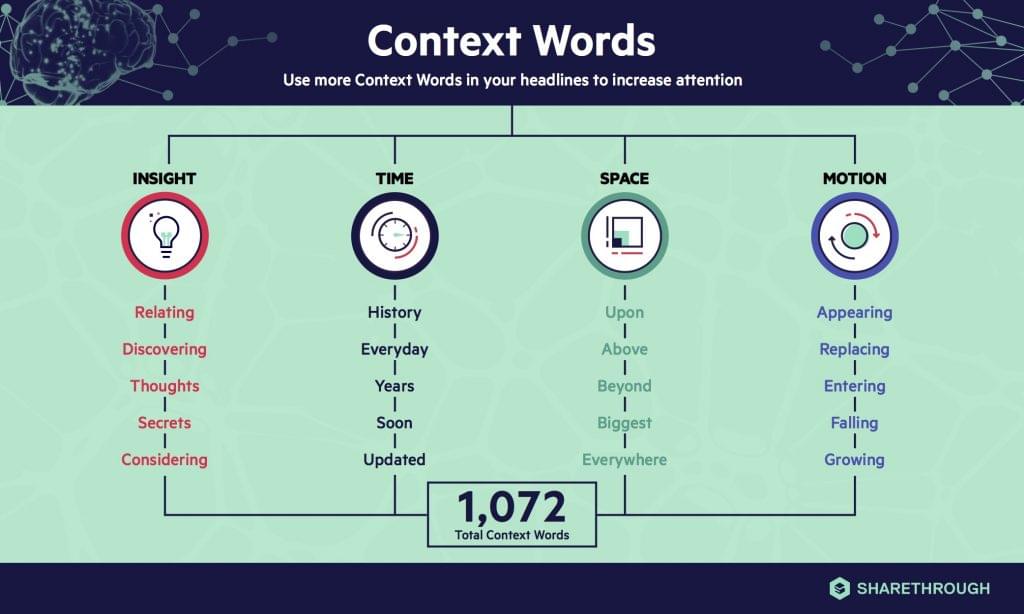 So if you’ve written a title that’s between 21-28 words long, you should have about 4 Context Words in there, on average. Doing so will appeal to people’s emotions, and that means more people clicking to download your white paper.

This might seem like the opposite way to write anything, but according to Eric Athas, former manager of training at NPR and now senior editor of digital training at The New York Times, writing your title or headline first actually helps unleash your story’s full potential.

This is true of news stories, white papers, essays, and blog posts. In fact, I took Eric’s advice and started this article out by writing the headline first. Did it work?

Eric says writing your title first is useful for a number of reasons. For one thing, it’ll help you stay focused throughout the rest of your writing, and for another, it will give you enough time to actually write a good title.

The title is often the last thing we write after slogging through a 1,500-word explanation on how to write white papers, for example, but saving the title for last sets you up for failure.

Also read: Three of the Biggest Mistakes to Avoid When Creating White Papers

Editors Say, “Titles Should be Specific!”

Bad ideas are everywhere. In fact, here’s one right now: “Maybe if I write a vague title, people will click on it just to find out what I’m talking about.”

False. People will not do that.

In their article “How to write great headlines that keep readers engaged: 5 tips (and examples),” NPR’s Colin Dwyer and Stephanie Federico say, “We want to create a positive experience for people — from spotting the headline to clicking to reading/watching/listening to sharing to returning. We don’t want people to feel tricked or disappointed, right?”

In other words, people might click on your vague title to find out more, but they won’t engage with it. People have little patience for writing that doesn’t get to the point, especially with white papers.

Also read: Here’s A Free White Paper Template To Give Your Content Strategy A Boost

White papers are supposed to be informative and specific by nature, so if readers are having to ask themselves “What does this have to do with the title?” as they’re reading the white paper, they aren’t going to stick around for long.

You could argue that engagement doesn’t matter that much if you just want people to download your white paper in exchange for their contact info, but how do you think that reflects on you? Besides just being a lazy approach, writing intentionally vague titles is also a scummy business practice. People detect this.

Writing is hard. Why not let us do it for you?

Whether you clicked on this article unconsciously or not, you should have some good insight into how you can consciously write better titles. By making them longer, adding Context Words, putting them first, and making them specific, titles can do a lot for getting more people to read your white papers.

Writing white papers is hard. Writing anything, period, is hard. Why not let us do it for you? Give us a call at 877.702.2082 or email us at info@technologyadvice.com to learn more about our content services today.

If DIY is more your style, check out our white paper below.

Three of the Biggest Mistakes to Avoid When Creating White Papers

Learn more about how to create white papers with our market-leading research.