Prior to releasing its exclusive shows House of Cards and Arrested Development, Netflix made the decision to heavily promote both programs — pouring millions of dollars into TV, print and online advertising. Thanks to tremendous storytelling and strong marketing campaigns, each show proved to be a massive success.

But when Netflix prepared to roll out its third original series, Orange is the New Black, they didn’t build it up nearly as much as they did for its predecessors. In fact, outside of a few commercials, they barely marketed it at all.

And yet, Orange is the New Black garnered more viewings in its first week than House of Cards and Arrested Development.1

OITNB didn’t have the star power of Netflix’s other shows; nor did it have much momentum leading up to its release. So how, exactly, did it do so well?

Truth is, Netflix didn’t have to market OITNB, a show about a woman who is sent to jail for a crime she committed more than a decade earlier. Thanks to Netflix’s in-depth audience studies and design strategies, company executives knew its users would watch the dark comedy regardless of whether or not they heard about it elsewhere.

By using comprehensive big data analysis that far exceeds those of its competitors, Netflix is able to investigate what its 30 million-plus subscribers enjoy. Here are some of the ways they break the info down:

Kate Epstein of CounterPunch.org explains how this data can be applied, using House of Cards as an example:

This information has long dictated what content Netflix decides to license and recommend to different viewers, but “House of Cards” was the first time any company had ever used such data in the creative production process for a T.V. show. It started when Netflix noticed that there was significant overlap between the circles of viewers who watched movies starring Kevin Spacey and movies directed by David Fincher from beginning to end, and viewers who loved the original 1990 BBC miniseries “House of Cards.” Subscribers were shown one of ten different trailers for the series based on their consumer profiles. The producers also knew, from studying viewers’ watching patterns, that releasing all thirteen episodes at once would promote and reward the binge-like behavior demonstrated by their target audience. The new strategy paid off, with ten percent of Netflix subscribers watching the series within two weeks of its debut, and 80% of viewers rating it “good” or “exceptional.”2

The same approach was used with OITNB. Before the show blossomed, researchers came to understand that a high percentage of Netflix’s users enjoyed 1) dark comedies, 2) plots revolving around prison/crime, and 3) a likable female lead. Those three factors rarely combined in the same recipe, but blending them together proved to create a fantastic, one-of-a-kind program.

But here’s the key to Orange is the New Black’s success: Netflix came to understand that roughly 75 percent of its views come purely from its recommendation section, which is displayed at the top of site’s homepage. To create this, analysts used the aforementioned data to put together an extremely accurate recommendation system unlike any other in the industry: 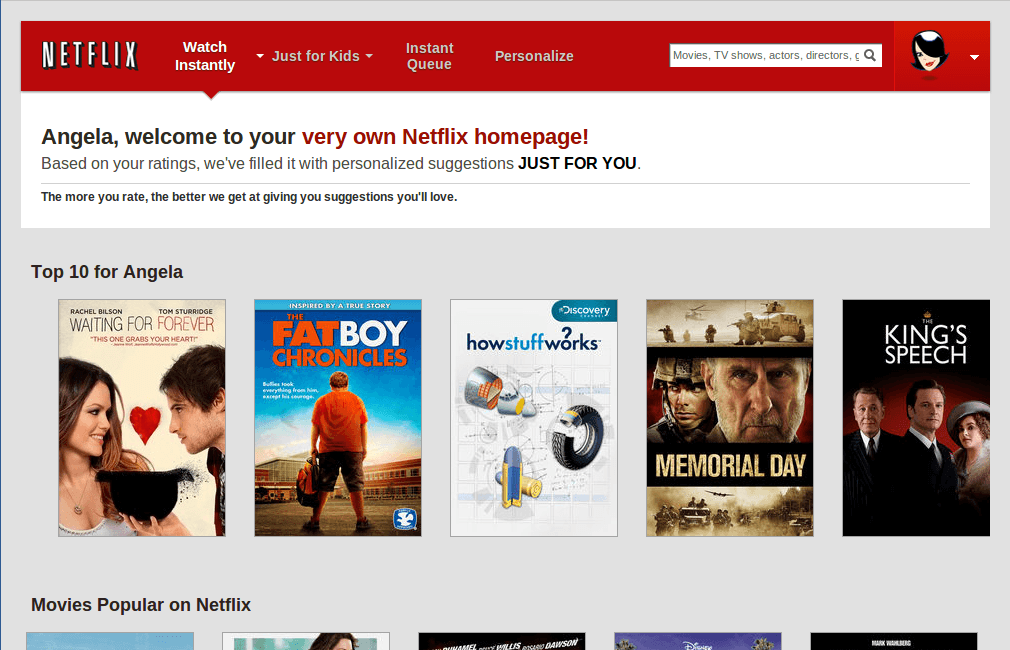 So Netflix had an epiphany. They didn’t have to market Orange is the New Black —  people who would like the series would naturally see and choose to watch it. Given the show’s premise and the audience’s taste in TV, Netflix knew hundreds of thousands — perhaps millions — of people would get hooked.

So how does all this apply to your business? Well, it means that embracing big data analysis can not only be a more cost-efficient alternative to traditional marketing, but it can be far more effective, as well. Even if you want to maintain your advertising practices, using new-age data analysis can help you mold your next product(s) the way Netflix has done.