As business leaders, we have a responsibility to find tools that increase our bottom lines, support our clients, and improve both employee productivity and work environment. As a result, we carefully evaluate dozens of systems, spend countless hours customizing them, and invest hard-earned dollars in hopes of getting an outsized return.

Too often however, our efforts fall flat. The systems that we worked so carefully to integrate into our businesses fail to yield the return we expect.

So why do software implementations fail?

While the primary reasons for failure varies depending on several factors (including poor project management, unrealistic expectations and unclear objectives) user adoption is an unavoidable hurdle you must overcome for your implementation to be a success. In the words of the great Michael Scott, Wayne Gretzky once said: 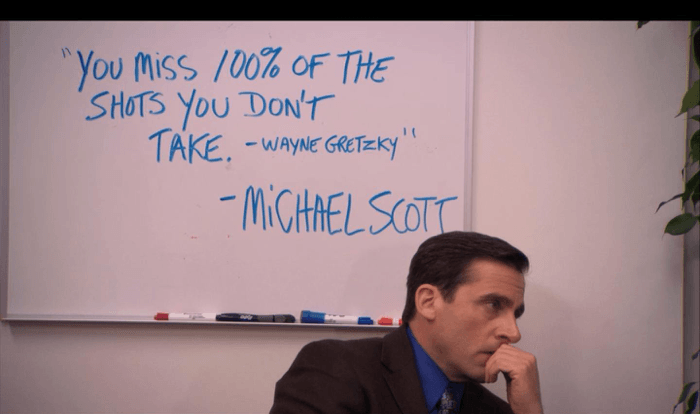 Along the same lines, tools that aren’t used provide 0 percent of the value.

How serious a problem is user adoption?

A 2007 study reported that 83 percent of senior executives identified CRM adoption as the number one challenge. While things have improved since then, according to more recent research by Forrester more than 1 in 5 of all reported CRM implementation problems were still staff-related.

What can I do to improve my odds?

Aside filling your roster exclusively with tech-savvy millennials, there are a number of things you can do to improve user adoption of your next system.

Give staff a system that solves a problem that they already experience. Will your project management system help them complete projects sooner? Will the accounting system help them balance the books more efficiently?

If you change someone’s job, without offering a clear benefit in return, expect friction. So show them how the changes will provide value to them. E.g. If you want a salesperson to log their calls more diligently, make it clear how logging calls will improve their close rate or save them time.

Changes, particularly changes without obvious benefit, will be seen as bureaucratic and controlling. They will chip away at the social capital and culture you’ve established. On the other hand, if you give staff a tool that scratches an itch they already have, you’ll have the opposite effect.

When businesses institute a new systems, they generally take one of two approaches:

Big bang changes can be more efficient, but only if the move works on the first attempt. It’s the “swinging for the fences” or the “hail Mary pass” of the software world: triumphant when successful and terribly discouraging when it isn’t.
Phasing in a new system poses a lower risk, lower stress, lower effort strategy. It has also become much more feasible with the advent of cloud, self-serve, and pay-as-you-go software. In the phased approach, each employee can switch to the new system at their own pace. So while techies blaze the trail and lead by example, staff resistant to change can switch on their own accord.

The benefits of offering staff mobile solutions are plentiful. Organizations using mobile CRMs experience a 62 percent increase in usage and adoption. As a side effect, frontline employees see a 77 percent improvement in productivity.

People like apps for several reasons. One of which is that they are generally designed more thoughtfully than desktop apps. Because designers have such limited real estate, they are forced to prioritize functionality and simplify the interface, tilting the table in favor of user adoption.

Mobile also opens the door to a BYOD (Bring Your Own Device) policy, which gives staff extra freedom and lets them use the phone or tablet that they already love. It takes device resistance out of the equation, just as long as the apps you choose are available on all platforms. BYOD will eliminate a major stumbling block along the way to user adoption. 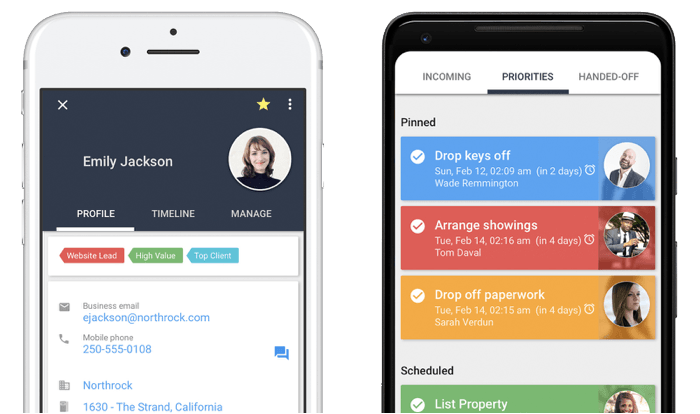 Even if you do everything else right, if you pick poorly designed software, you’ll sentence yourself to an eternal uphill battle. There are entire branches of computer science dedicated to the design and user adoption. Here are 3 big characteristics to look for when selecting your next system:

Soviet psychologist Lev Vygotsky, introduced the concept of “zone of proximal development”, stating that optimal learning in children is achieved when straddling the line between the familiar and the new.

When staff are introduced to a new system, the functionality will necessarily be new, so make everything else as familiar as possible. Apple and Google have both invested millions of dollars developing design frameworks for apps to follow. Apps like Solve Client Manager adhere strictly to Google’s Material Design framework which is particularly good at making apps seem familiar and intuitive. (disclosure: I work for Solve)

Ease of use will inevitably be a deciding factor in the adoption of any system. Contrary to popular belief, powerful systems can actually be quite easy to use. Look for these characteristics:

The idiom of “less is more” could not be of higher importance than it is for user adoption. As was hinted at earlier, some mobile apps have mastered this.

Complex or busy systems cause content overload and unnecessary stress on the user. Good designers follow the Pareto principle, knowing that 20 percent of the features will produce 80 percent of the value, they mercilessly cut the fat. While this can be frustrating when trying to check all your boxes, trust the designers and their science. Minimalist apps get better results.

Whether you bring in consultants or just do a demo with staff, some form of training should take place. The amount of training required will depend on the complexity of the system, staff comfort with technology, and the number of roles and use cases. In any case, training is typically optimal if the system is already set up, so staff can practice immediately after learning using their own data.

Exhaustive training can be as demoralizing as having none at all. So it’s important to strike a balance of helpful and expedient. Make sure your vendor has you covered. Good apps are self-explanatory, and they offer self-help material as well as fast, free and helpful support.

In summary, user adoption is critical to any system implementation. To improve your chances of success, ensure you solve real problems for the end-users, phase the system in, offer mobile options, select well designed systems that are familiar, easy and minimalistic and provide training.

Mike McNulty has been helping small business implement Solve since 2010. He loves summer and hates Brussels sprouts, no matter how good they are for him, and he saw a blimp once.